The Gerald R. Ford Amphitheater found a way to welcome thousands of visitors safely and comfortably in 2020, helping send a message of hope to everyone in our community. People have always come together to support this jewel of the mountains, and this summer was no exception. For this, we have YOU to thank.

The Amp
By the numbers

120+
workers received part or full-time employment at The Amp

$60,000
raised through Turn Up The Amp matching fundraising campaign

Uniting to
TURN UP THE AMP 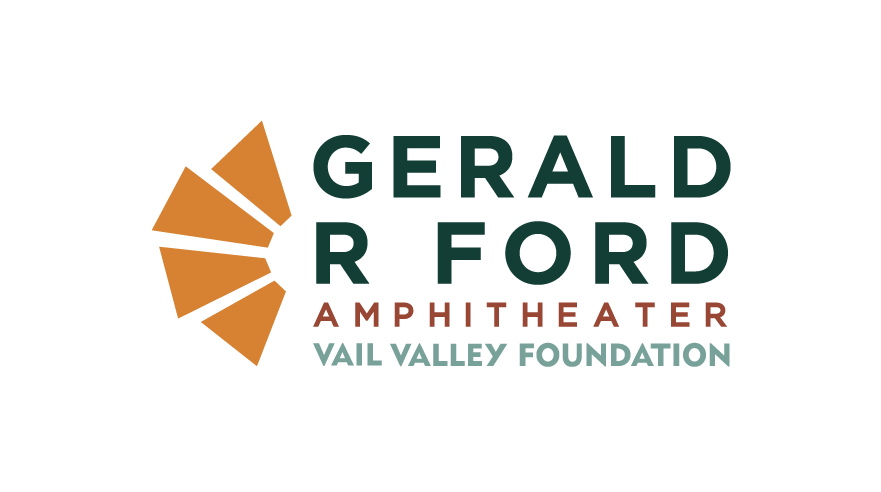 The Gerald R. Ford Amphitheater was one of the Vail Valley Foundation’s first major projects. Completed in 1987, the venue opened to much fanfare, with Gerald R. Ford and Bob Hope presiding over its opening event and Willie Nelson among the many stars who, soon afterward, graced the stage.

In that time, the venue has hosted top-tier artists, orchestras, dancers and rockers from around the globe, becoming a regional center for the performing arts in summertime. Its outdoor stage, with gardens behind, and mountains all around, is among the most beautiful in the nation.

In 2020, the Vail Valley Foundation partnered with 970 Designs to capture the essence of the venue, and all it has to offer, in a new brand identity. New logos, fonts, and assets refreshed the look and feel of the venue’s marketing collateral. They also allowed for the type of dynamic marketing that is essential to meet the organization’s goal to bring the venue to the forefront.

Some will note that the new branding reflects the beautiful architecture found at the Amphitheater. For others, it may represent the sounds that emanate from the stage or the sunrays that beam down on the open-air venue. Representing all of this was taken into account when developing the new brand. Summer in Vail is epitomized by the Gerald R. Ford Amphitheater, and this new mark is a reflection of that.

announced that Lindsey Stirling would perform at the venue in July. The show would be part of a 36-city international tour for the pop icon and violinist, whose genre-bending performances involve laser shows, colorful costumes, fog machines and a stage worthy of a Broadway performance. Tickets were selling fast, and plans were being made for special VIP experiences for superfans to meet the artist.

Five days later the first case of coronavirus arrived in Eagle County. Within another week, the Vail Valley and the nation were in the grips of a pandemic lockdown. Only essential services were available, and the idea of up to 2,800 spectators gathering together at the Ford Amphitheater suddenly seemed a distant, improbable, memory.

In the harried weeks of March and April, the Ford Amphitheater staff made and remade plans for if, how, and when, the venue could reopen. The Public Health guidelines that governed such plans changed rapidly as state and county regulations merged, then diverged, then merged again.

Throughout it all, there was one point of clarity: If Public Health guidelines allowed it, the venue would open.

“We were getting news of performing arts venues around the country simply closing down, alerting their staff there would be no work, and cancelling all their shows,” said Tom Boyd, Director of the Gerald R. Ford Amphitheater.

“From one standpoint, a shutdown would have been the easiest thing to do. In our case, however, we felt strongly that the only reason we are here, and we are successful, is because year after year this community comes together to support this incredible venue. We felt it was our responsibility to do everything we could to open, to provide whatever level of coming together, of enjoying life, that we could, even if it meant operating in totally different way and, frankly, at significant financial risk.”

At the entrance to the Gerald R. Ford Amphitheater, engraved in a stone bench at the center of its social courtyard, is a quote which reads:

“The world is not a lonely place, there is light and life and love enough for all of us.”

This quote became a mantra for the Vail Valley Foundation staff as they developed new protocols and plans, booked new (mostly local and regional) artists, and improvised and innovated along the way. Vail Valley Foundation staffers, who worked in other departments or for other venues, pitched in, volunteering their time and effort as ushers so the venue could open. The America Days Fourth Patriotic Concert, a staple of the July 4 holiday, and held in support of Vail Valley Veterans, was unfortunately cancelled.

Capacity was limited to 175, and a host of other protocols were put in place, but bit by bit, a season came together and, on July 6, the VVF announced that the venue would open July 11.

It would prove to be a surprisingly good season. The Vilar Performing Arts Center booked an incredible show for Aug. 14, and hosted it at the Gerald R. Ford Amphitheater. The show (Joshua Bell and Larisa Martinez, with Peter Dugan) became a highlight of the summer not only because of the quality of the performance, but also because of the show of unity it represented, with both VVF venues working together with the community to create something special in a time when it was needed most.

The VVF’s friends and partners at the nonprofit Bravo! Vail Music Festival contributed as well, putting together seven exceptional classical shows in July and August.

Hot Summer Nights continued its more than 30-year run with a complete season of Tuesday night rock concerts. Although the event has been historically free, the 2020 Hot Summer Nights shows moved to a $10 ticketed system in July to ensure that all 175 available spots were taken and used. Together with a new “Movie Night at The Amp” series, the Vail Dance Festival Watch Party, and a few smaller events, brunches, and get-togethers, the Ford Amphitheater season felt, at times, almost normal.

The venue also tried something new in 2020: a matching contribution campaign known as “Turn up The Amp.” Because of YOU, the community came together to raise more than $60,000 to help the venue through a difficult financial year. The matching sponsors played a critical role, including: GMC, TIAA Bank, Nature Valley, Pacifico, Aperol, Espolon Tequila, BluSky Restoration Contractors, Encore Electric, Meiomi Wine, Holy Cross Energy, Deep Eddy Vodka and Cocktail Squad.

The Town of Vail, as it has been throughout the venue’s history, was also a very supportive partner of all the Ford Amphitheater’s efforts in 2020.

The venue team is now turning the corner toward a markedly improved situation in 2021. Many officials expect a “ramping up” of public activities throughout spring and summer of 2021, and the venue is prepared to welcome a full slate of concert activities as the world returns, step by step, to a state where we can gather together and enjoy the performing arts.

We’ve been playing Zoom screens, Facebook screens, it felt really great to finally play in front of live people. By the numbers it was a small crowd, but it felt like it was 5,000 people.

People at these shows are lifted out of this strange world for three hours. It’s a true escape. The tickets for these shows sell out in seconds. We’ve had 100-person waitlists for our shows. Live streams of concerts can only give you so much. We’ve got to take care of each other. People are super psyched to do anything right now. People are so starved, they need to be lifted up for a second. The people who are here, you can clearly see how much they’re enjoying themselves.

We are really thankful to the Vail Valley Foundation for opening the Ford Amphitheater. They are really going out of their way to keep bringing the music. It is so important. We’re all grateful for all of that.

We make live music a priority. It lifts your spirits, which is well-needed right now, especially. We feel super safe here.

Sunshine in our
FUTURE 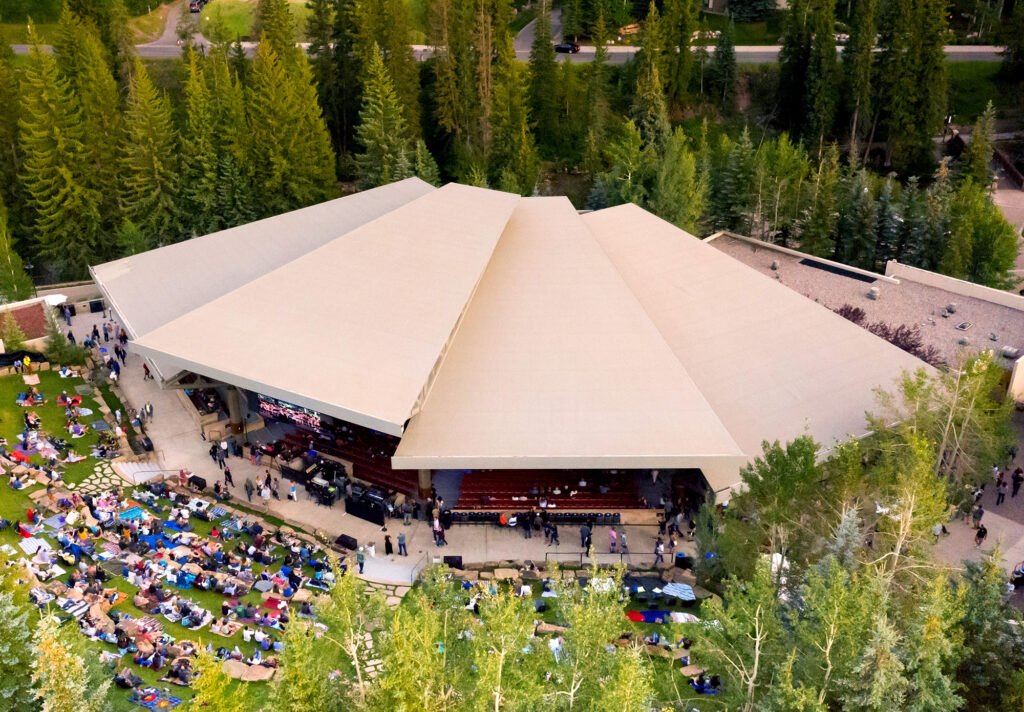 At the drawing board

The Vail Valley Foundation is exploring options to add a 58Kw photovoltaic system to 1/4 portion of the iconic roof at the Gerald R. Ford Amphitheater.

There is much to look forward to at the Gerald R. Ford Amphitheater. The venue has come into its own, offering a full slate of classical, dance, rock, comedy, and more throughout the summer. With more shows available, and more dates booked, than ever before, the venue is initiating a series of projects to ensure that it can transition swiftly between shows, offer state-of-the-art production services, and maintain its reputation among audiences as a world-class facility for years to come.

Solar power is one of these projects. The venue will need to replace the waterproof roof membrane in the near future, and during that project, the venue is exploring the idea of placing solar photovoltaics on its westernmost rooftop. The 58 Kw system would be enough to offset almost half of the Ford Amphitheater’s power usage throughout the season.

The venue has also embarked on a project to enhance its acoustics. An orchestra and a rock concert require very different sound topographies to deliver a quality listening experience – and the venue is modeling the building acoustics and designing solutions to find innovative improvements to the building’s unique architecture.

Together with improvements to the production equipment and facilities, which are designed to speed the transition time from one production to the next, these changes should put the building at the cutting edge of technology as it continues to host top-tier artists and performances for years to come.

Movie nights, special concerts, and new protocols made a recipe for success.
Photos by Jon Resnick. 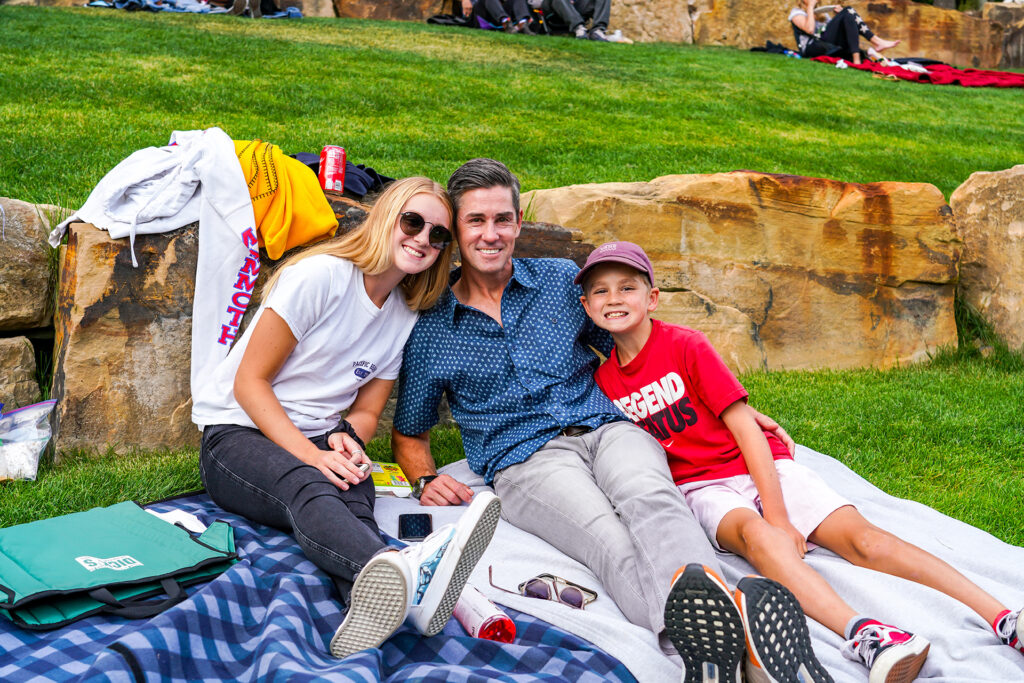 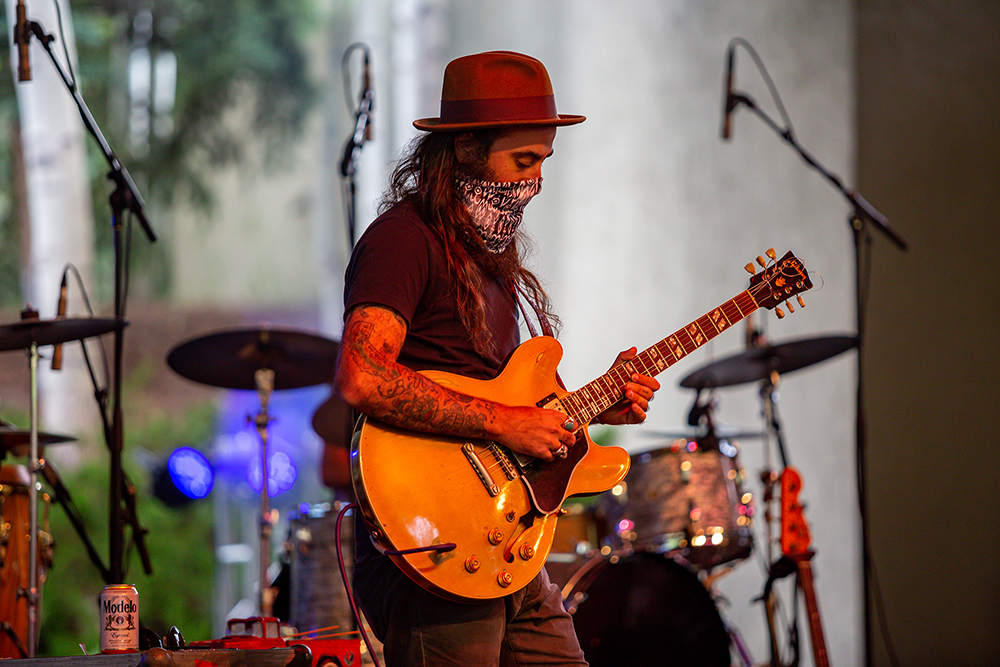 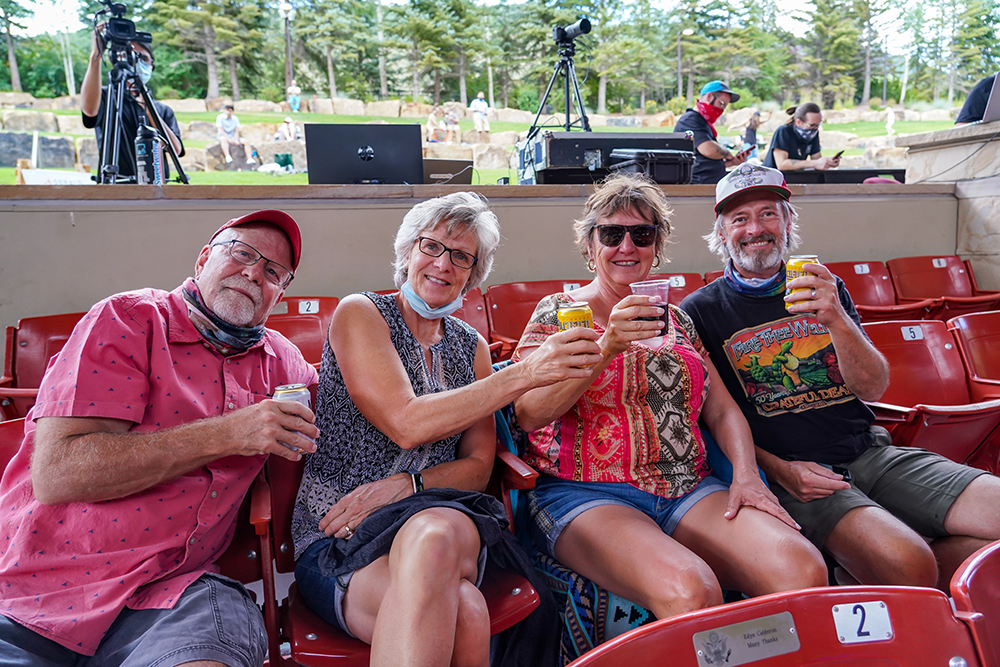 A big ShowDown
Next summer

Early in the summer, the Vail Valley Foundation made the difficult decision to cancel the 2020 ShowDown Town concert series in Eagle. Unlike the Ford Amphitheater or the VPAC, the venue does not have a clear perimeter, which would have made it difficult to make safe, secure, and within Public Health restrictions.

The Vail Valley Foundation looks forward to welcoming back the ShowDown Town concert series when Public Health guidelines are lifted.